SOURCE FOLLOWER ON THE HIGH VOLTAGE MOSFET AS CATHODE FOLLOWER

Several years ago, there was a remarkable article by Mikhail Kryukov (KMG), which is described in detail why the channels guitar preamps usual source follower loaded with standard guitar tone stack, may not sound as well as the cathode [1]. There were proposed also solutions which allows to make sound of the follower on MOSFET closer to follower of 12AX7 (ECC83). Author in some of his following works has perfected the follower, using a low-power transistor LND150 and significantly simplified the scheme [2]. 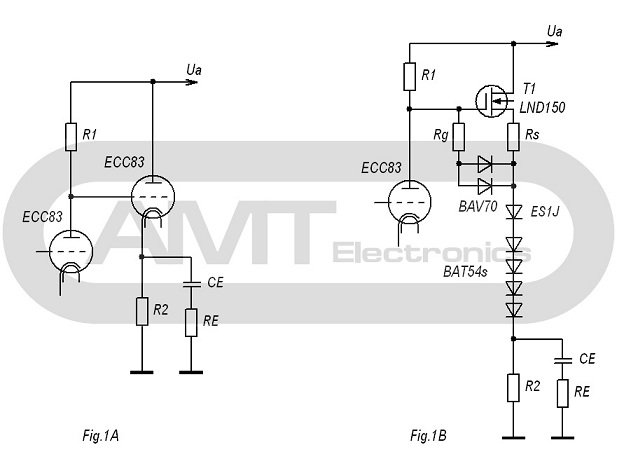 At the attempt of replacing the tube cathode follower in the preamp based on Mesa Boogie Rectifier Series with transistor LND150 get full compliance waveform did not managed (Fig. 2). If with the bottom shelf no problems, then the angle of inclination of the top shelf of the field follower (yellow line) was almost two times sharper than tube follower (red line). Aurally it sounds a bit more “husky” shade sound of triode follower because of the greater asymmetry and greater levels of even harmonics. 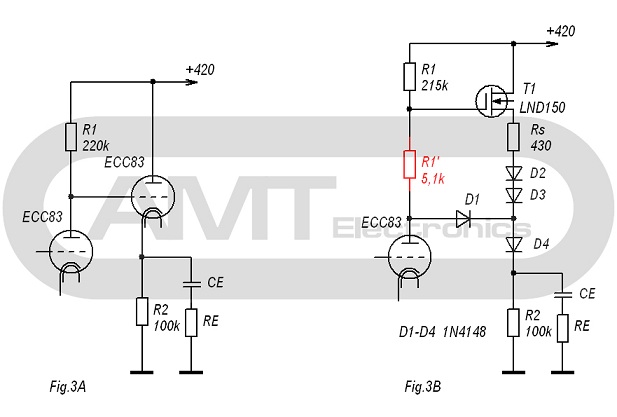 Change resistances of cascade and selection types of diodes, unfortunately, did not give a positive result. Only shelf height was changing, and the tilt of upper shelf triode follower was always much lower.

Analysis of the causes of this phenomenon led to the conclusion that the whole thing because of existence at the triode of same internal feedback that impact on the grid field. In the case of the cathode follower a potential at the anode is constant, but the cathode potential “follows” the grid potential. Thus, the potential difference between the cathode and the anode varies, so does the intensity of the anode-cathode field, which [intensity] is summed with the field of the grid has an effect of “compressing from the top” on the shape of the upper shelf of the output signal.

The simplest solution to this situation is the introduction of a feedback via the anodic load of the preceding stage, designed as a conventional divider. Theoretically, the division ratio of the divider must match the internal gain ratio of the triode «Mu». In practice, due to the additional  influence of auxiliary diodes better filter the dividing ratio in the range of Mu/2 … Mu/3.

Scheme of modified follower which is replace the cathode follower Mesa Boogie Rectifier shown in Fig.3B. Figure 2 shows its signal in blue and, as we see, is almost identical to the signal of follower at the triode (red curve). 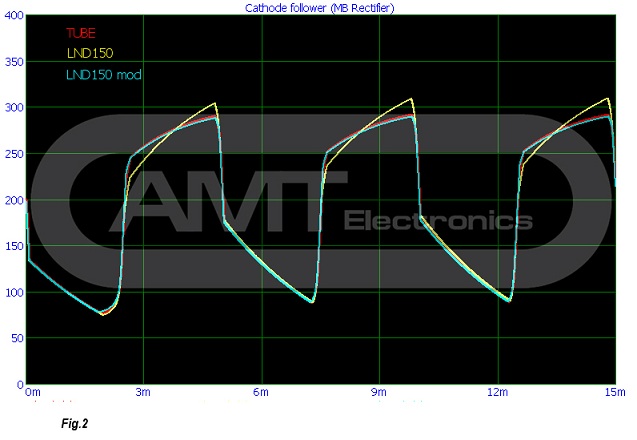 LND150 have a small spread of parameters, and in most cases, the waveform will not differ more than in case of using the triode from another manufacturer. But in some cases it may be necessary to “fine-tuning” of height and angle of inclination. The height of the upper shelf increases with decreasing Rs. Angle of inclination is determined by resistor R1′ and increases with its decreasing.

In conclusion, it is worth noting that in the cascades with the anode resistor from previous cascade which approximately 100kOhm, difference is visible smaller and much less feel on hearing. But if you are meticulous and want full repetition of the behavior of the vacuum triode in cathode follower, you should pay attention to the above feature.

No Result
View All Result